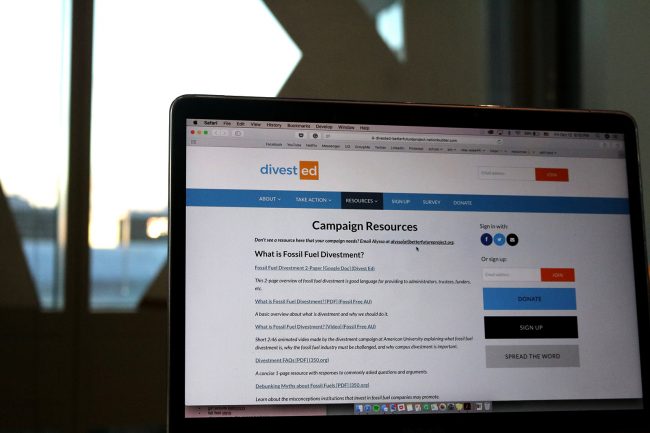 The group announced in April that they would expand their efforts nationwide and have been working to develop Divest Ed ever since, said Rachel Schlueter, a Boston University alumna and campus organizer for the Better Future Project.

Better Future Project Executive Director Craig Altemose said Divest Ed is meant to be a central hub for students seeking information and guidance as they begin and run campus fossil fuel divestment campaigns across the country. It is primarily organized by Better Future Project Director of Campus Programs Alyssa Lee, Altemose and other campus organizers such as Schlueter.

BU has its own divestment movement, Divest BU. Masha Vernik, a student leader in Divest BU, said that Divest BU receives valuable leadership and guidance from Divest Ed and the Better Future Project.

Divest Ed is a response to a call for aid and leadership by campus fossil fuel divestment movements around the country, Altemose and Schlueter said.

“We felt there was an important role for us to play and we are stepping into to make sure students around the country who need and want more direct support are able to have it,” Altemose said.

Divest Ed provides various resources for student activists, Altemose said, from how-to guides on running effective campaigns and building power to information on divestment and reinvestment. The site also offers webinars for student activists to connect and share best practices and a full-year fellowship where students receive training on how to be a divestment student leader.

Divest Ed is working with more than three dozen campuses, according to Altemose.

“Every campus we have connected with that is working on divestment has expressed a lot of interest and excitement around getting support from us on it,” Altemose said. “We’re very pleased with that response.”

Altemose also said that all referendums he has heard of found that students overwhelmingly want their university to divest.

Divestment is an effective tactic for fighting climate change because universities are huge sources of wealth and therefore have a big impact on the companies they invest in, Schlueter said. Because of this, she said university divestment represents an opportunity for major change.

Divestment movements have been very successful in moving money away from fossil fuel companies, Schlueter said.

Divest BU began its work in 2012, and in 2016 reached a milestone when BU pledged to divest from coal and tar sands oil, which, Altemose said, are among some of the dirtiest fossil fuels.

But, Vernik said that the group was dissatisfied that the university ignored demands from students, faculty and other stakeholders to divest from fossil fuels completely, and they have been pushing for full divestment since.

“Students pushing for divestment across the country have gotten to the point where they’re actually getting arrested on campus because they’re escalating in response to their administrations’ rejection,” Schlueter said. “But there’s still no action taken by the administration, so that’s led to a lot of disenchantment and frustration in the movement.”

Divest BU is working on a reinvestment proposal for the university that would encourage BU to divest from fossil fuels and reinvest in local businesses, Vernik said.

Altemose, Schlueter and Vernik all said that they hope Divest Ed will not only help existing student activists, but lead to more students leading campus divestment movements and furthering their awareness of climate justice.

“A key piece is to help train the next generation of climate justice leaders,” Altemose said. “It’s an important opportunity for students to develop a sophisticated political analysis of climate change.”

BU students said they were generally supportive of the divestment movement, though not all would want to join themselves.

“I would support a campaign, but I wouldn’t want to be one of the people running it,” said Aidan McCall, a freshman in the College of Engineering.

Sophia Kapreilian, a senior in the College of Communication, said that though she hadn’t known about campus divestment movements previously, hearing about them sparked her interest.

“It would be cool to be a part of that,” Kapreilian said.

Morgan Moscinski, a sophomore in the College of Fine Arts, said she supports sustainable energy sources over the fossil fuels BU currently invests in.

“I think we should use the least amount of fossil fuels as possible because they are bad for the environment,” Moscinski said. “I think other, more sustainable energy sources would be something we could move towards.”