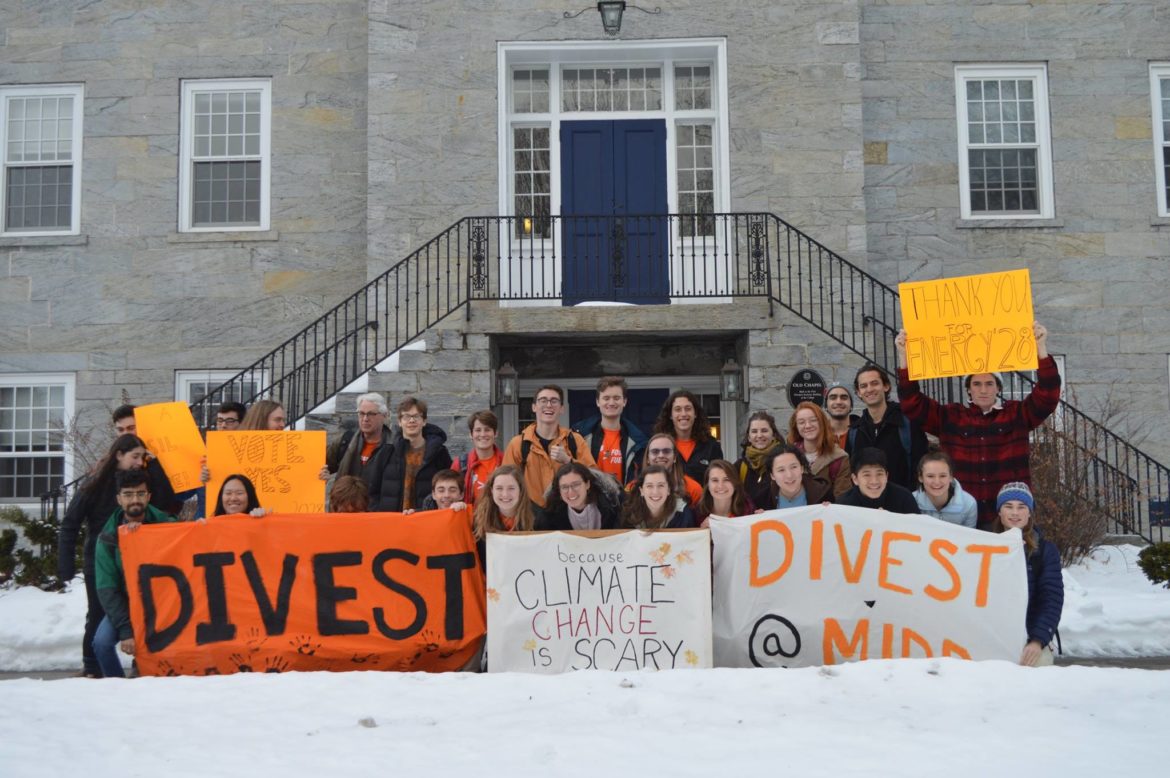 Middlebury College, in Middlebury, Vermont, announced in January that it would divest from fossil fuels after facing pressure from student activists aided by the Cambridge, Massachusetts-based Better Future Project.

The Massachusetts program will offer training and other services to student activists across the country.

A Massachusetts nonprofit has launched an initiative it hopes will help reinvigorate the campus fossil fuel divestment movement by providing training, coaching, and community to student activists.

“The movement still has a lot of work to do,” said Alyssa Lee, director of campus programs for the Cambridge-based Better Future Project, which runs the program. “It is still really, really important to keep going.”

The program, called Divest Ed, is an outgrowth and expansion of work the Better Future Project has been doing for several years. Campus divestment efforts — campaigns aimed at convincing colleges and universities to pull out of their investments in fossil fuel companies — have been around since the 1990s.

The movement gained momentum in 2012 and 2013, as national groups like 350.org and the Divestment Student Network began training, connecting, and supporting campus groups across the country. The Better Future Project did the same on a regional scale, working with initiatives in New England.

In 2017, however, these national groups stepped back from this work, Lee said. As national support scaled back and many of the original student organizers graduated and moved on, many campus initiatives began to flag. With its background in divestment education, the Better Future Project decided it was well-positioned to step into the gap.

“There was a hole around the climate justice demands,” Lee said.

The group spent much of 2018 planning and preparing, and, in October, Divest Ed was born.

The centerpiece of Divest Ed’s work is the intensive, one-year organizing fellowship. A cohort of about 40 campus activists — generally teams of two per school — is selected to spend a year learning all the ins and outs of successful organizing, from the economics of endowments to the logistics of planning an action.

“By the time they graduate out, they’ve learned the whole A-to-Z of how to plan a campaign,” Lee said.

This year’s fellows attend 20 different schools, from the University of Puget Sound to Boston College. Divest Ed likes to work with younger students, often freshmen and sophomores, so the activists they train have more time on campus to make an impact.

Fellows participate in two conference calls each month and gather for two in-person retreats during the year.

“We got to gather 40 super-passionate college divestment activists in one room and all learn from each other’s experiences,” said fellow Ilana Cohen, a Harvard College freshman.

Cohen is helping spearhead the second iteration of fossil fuel divestment activism at Harvard. The first campaign, she said, fizzled out in 2017. Connecting with a national network, she said, is particularly helpful as the revitalized campaign tries to learn lessons from previous efforts and plot a new way forward.

“Making those connections — the fellowship is invaluable in that regard,” she said.

Divest Ed also offers a range of coaching services and collaboration opportunities for schools not represented in the fellowship program. The organization hosts regular webinars, open to all campus activists, on topics such as negotiation and campaign strategy. It also holds frequent discussion calls, letting students share challenges, get advice, and hear about other schools’ successes.

The divestment campaign at Middlebury College worked with Lee in this informal way in advance of the college’s Board of Trustees divestment vote in January. When the students were given a list of the actions the board might take, Lee helped them understand the nuances and the financial terms. On other calls, they discussed campaign strategy. Lee also visited Middlebury to speak on a panel about the divestment movement.

“They were a really great resource for an as-needed consultant,” said Zoe Grodsky, one of the leaders of Middlebury’s divestment campaign. 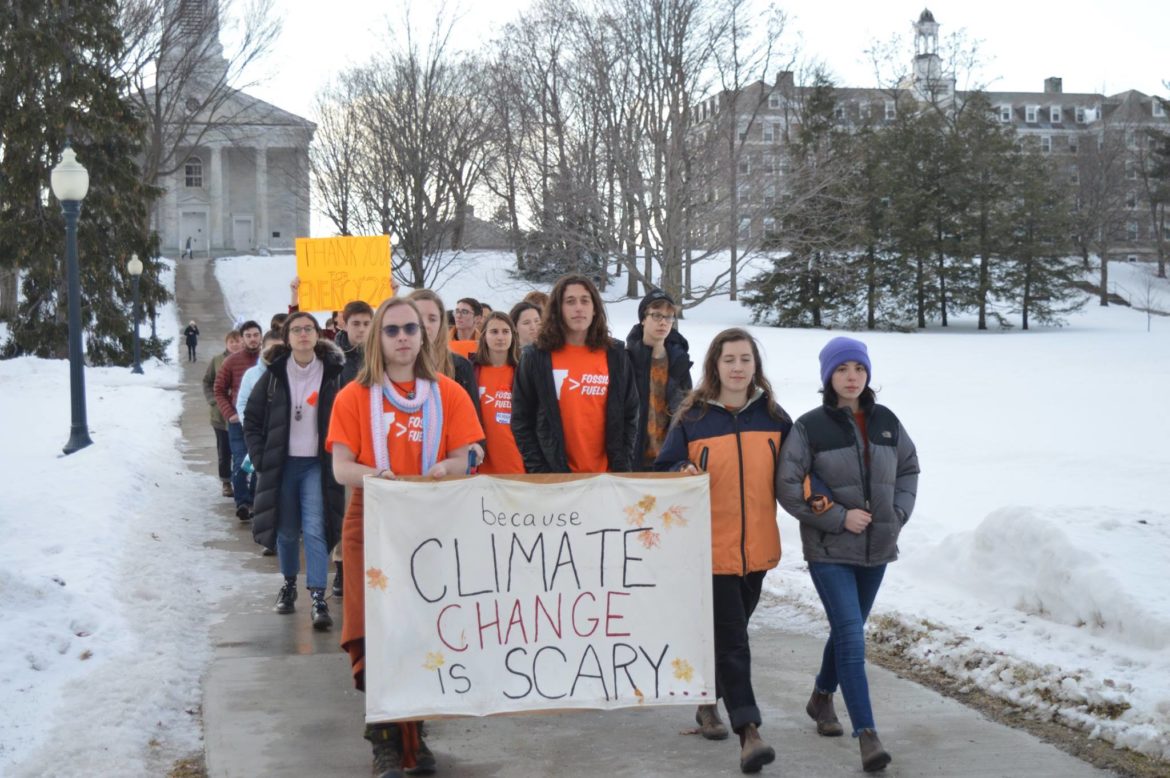 The college announced in January that it would, indeed, divest from fossil fuels. And working with Divest Ed will help the Middlebury group amplify the impact of its victory, by allowing the students to share lessons and inspiration with a national network of campaigns, Grodsky said.

“When you keep being told ‘no’ over and over again, it’s hard to keep faith that it’s going to turn into a ‘yes,’” she said. “It can be really encouraging to hear our story.”

The approach Divest Ed is taking — combining education, communication, and collaboration — is a promising one for the fossil fuel divestment movement, said Sean Estelle, network director for the Power Shift Network, a coalition of youth-driven activist groups of which Divest Ed is a member.

“It fits in with a lot of other tactics and strategies that are going on right now,” they said. “I’m super excited about the way this new iteration of fossil fuel divestment work has been being very intentional about identifying relationships with other struggles.”

There are those who question whether divestment works. Academic research has questioned whether cause-related divestment campaigns cause any meaningful financial impact. Advocates of fossil fuel divestment, however, say the approach works largely by strengthening social stigma against the industry, changing society’s ethical judgments in order to eventually change its behaviors.

“It’s about uniting people behind the idea that it is morally indefensible to invest in companies that perpetuate the climate crisis and perpetuate environmental injustice,” Cohen said.

Correction: A previous version of this story referred to Sean Estelle of the Power Shift Network using an incorrect pronoun.