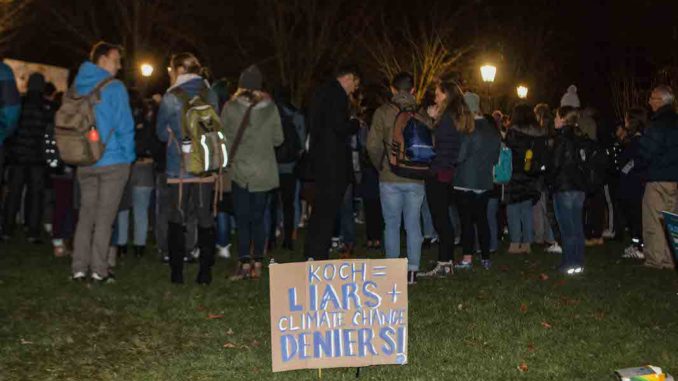 Over 100 protesters stood outside O’Neill Library on Thursday night to protest the Charles Koch Foundation’s potential involvement with the Boston College political science department. Students, faculty, and alumni gathered in opposition to Charles Koch’s support of climate change denial and in support of University divestment from the fossil fuel industry.

The political science department has twice voted to approve the potential collaboration with Koch—the billionaire owner and CEO of Koch Industries, which manufactures and refines petroleum. The first vote, which took place last spring, followed a discussion on whether to accept or deny the money on principle. Koch, along with his late brother David, is famous for donating to conservative and libertarian think tanks and scholars who promote deregulation and climate change denial.

Rachel Schlueter, a campus organizer for the divestment activist group Divest Ed, described how Fossil Free MIT, a student organization at the Massachusetts Institute of Technology, is working toward eliminating the Koch Foundation’s influence from their school. The Charles Koch Foundation recently donated $3.7 million to MIT’s security studies program.

Schlueter called gifts to institutions of higher education one of the “pillars” of Koch’s influence, along with campaign contributions and think tank funding.

In a second vote, held in early October, the faculty agreed to send a two-page “vision statement” to the program development stage. The Office of University Advancement is currently preparing a proposal to submit to the Koch Foundation.

Members of the political science department wrote the vision statement, titled “New Perspectives on U.S. Grand Strategy and Great Power Politics,” which describes a program that would “challenge received wisdoms” and address the costs associated with current U.S. foreign policy.

The vision statement also lists several potential uses for the funds, including a lecture series, fellowships for graduate students, or a five-year joint hire in the political science department and International Studies program.

At the hour-long demonstration, which was organized by Climate Justice at BC (CJBC), history professor Prasannan Parthasarathi began his speech by saying that Koch Industries is one of the nation’s biggest polluters and has been fined by the government in the past for environmental law violations, including major oil spills.

Parthasarathi noted that the Kochs have been a central topic of discussion in his ongoing course, “Planet in Peril,” which he co-teaches alongside sociology professor Juliet Schor. The class studies ecological challenges and the history of human impact on the environment, according to the BC course directory.

“[In my class], students learn that Koch Industries is one of the nation’s biggest polluters,” Parthasarathi said. “It dumps chemicals into our waterways, spills oil on pristine lands, and releases toxins into our air. The company has been fined repeatedly, but it has not changed its ways.”

Parthasarathi also said that Gerald Easter, chair of the political science department, chose not to list climate change as a national security threat example in the vision statement because he believed it to be a “poison pill,” which Parthasarathi called a form of “self-censorship.”

“[The climate change language] was suggested in a department meeting to test if the Koch Foundation was really going to be hands-off,” Easter said in a prior interview with The Heights. “And the faculty preferred instead at this point to just be general about what the program will accommodate and [the faculty] don’t want to explicitly write in what are the issues that will be addressed, including climate change, which of course has direct security implications.”

Easter said in the interview that climate change, as it relates to national security, can be part of the program’s potential manifestations, such as a speaker series or a conference.

Carli Brenner, MCAS ’21, spoke about her opposition to the funding. Brenner is the political activism chair for EcoPledge, a student organization concerned with sustainability on campus.

“We cannot help achieve environmental justice with a stifled education,” she said. “The money is not worth the risk. BC is founded on Jesuit values, like a holistic education, scientific inquiry, deep reflection, and service to others. The Koch Foundation’s values are in complete opposition to our own. They are donating to support themselves.”

In the audience, Bjorn Carlson, a fellow member of EcoPledge and MCAS ’20, agreed with Lawlor that the Koch Foundation’s gift could undermine academic integrity indirectly.

“So my concern as a student is that our academic academic integrity of our professors is is at risk, given that this is a five-year donation cycle,” Carlson said in an interview with The Heights.. “So what happens is, as these professors get the money, they’re going to have to continue reapplying to get the money. If the professors in the political science department become reliant on the donations, we’re afraid that they may self censor in their own research.”

Brenner said that although she is worried about the repercussions Koch funding could have on academic freedom, she said the widespread opposition she has seen from multiple student organizations gives her hope.

“It is moments like this that remind me we could be the generation to change [the conversation on climate change],” Brenner said. “This protest is part of a larger movement, one that spans the globe and generations.”

Carmen Chu, another member of EcoPledge and MCAS ’22, called for BC to divest from the fossil fuel industry. She cited a statement from Associate Vice President for University Communications Jack Dunn after students voted to support divestment in a non-binding Undergraduate Government of BC referendum last February.

“Boston College remains opposed to divestment from fossil fuel companies on the grounds that it is not a viable solution to the important issue of climate change,” Dunn said in an emailed statement to The Heights in February. “The University’s position is that the most effective way to limit climate change is for Boston College, along with corporations, organizations, and individuals, to take active steps to reduce energy consumption and enhance sustainability measures.”

Dunn had also said in his February statement that the University had implemented energy conservation campaigns and worked to secure Leadership in Energy and Environmental Design (LEED) certifications for new buildings on campus.

In response to the Thursday protest, Dunn said in an email to The Heights that the Association for the Advancement of Sustainability in Higher Education awarded BC a silver rating in its Sustainability Tracking, Assessment, and Rating System last May. He noted that Northwestern University and Yale University are fellow recipients of the silver ranking.

“Boston College is taking specific steps to reduce energy consumption and enhance sustainability,” Dunn said in his email. “We encourage all members of the BC community to do the same.”

Chu’s recitation of the statement on divestment was met with booing. She continued, citing Koch’s financial support for environmental deregulation and climate change denial.

“[The Kochs] funded hundreds of universities, pushing a right-wing, libertarian agenda along the way,” she said. “Their actions are self-interested as they promote the deregulation of industries that they have investments in, disregarding how oppressive and ignorant their practices may be.”

Chu went on to reference ongoing consequences of climate change—such as heatwaves, wildfires, or severe droughts—and called inaction an “abdication of responsibility.”

She referenced other colleges and universities that have recently refused or returned donations from controversial figures. An example given was Brown University, which redirected money from the Sackler family after reports that their company, Purdue Pharma, underreported the addictiveness of its painkiller OxyContin.

“Institutes of higher education should refuse to support the interests of the wealthiest people in the world,” Chu said. “If our own schools won’t stand up for our interests, who will?”

Robert Ryan, BC ’66, attended the protest to show his support for the fossil fuel divestment movement and criticize the University’s current stance.

“It’s sad for me to see Boston College being so careful about what they say,” Ryan said in an interview with The Heights. “You can’t be neutral about this issue. We’ve moved from calling it climate change to climate crisis to climate emergency.”

Rachel Schlueter, a campus organizer for the divestment activist group Divest Ed, described how Fossil Free MIT, a student organization at the Massachusetts Institute of Technology, is working toward eliminating the Koch Foundation’s influence from their school. The Charles Koch Foundation recently donated $3.7 million to MIT’s security studies program.

Schlueter called gifts to institutions of higher education one of the “pillars” of Koch’s influence, along with campaign contributions and think tank funding.

Kayla Lawlor, MCAS ’20, explained that several of her professors in the political science department have defended the vision statement by saying that political science faculty will resist encroachment on their academic freedom.

“I say to my professors, ‘This isn’t a matter of having confidence in your colleagues’ academic integrity,’” Lawlor said. “That the money was actually sought out is what is truly at issue.”

Kate Meyers, a student who attended the protest and MCAS ’20, said in an interview with The Heights that accepting the funding would result in the University giving up on academic freedom.

“The fact that as an institution, I can’t have a free … learning environment, especially as an environmental studies major, that’s just so against everything that I believe in,” Meyers said. “I’m graduating, I’m getting my diploma, but the people after me, the education that they’re going to get here is going to be tainted, so it feels like a deep infiltration.”

Other students showed more concern with the principle behind accepting the funding, rather than the potential effects.

“It’s definitely a bad moral principle for BC to be accepting money from people who have funded so much climate denial and other anti-environmental causes,” Asa Ackerly, MCAS ’22, said. “I’m confident enough in BC’s academic standards [versus] what happened at other colleges so I feel like I’m not actually that worried about that.”

Lawlor also condemned the University for opposing divestment, which she noted was a market-based solution.

Audrey Kang, MCAS ’22 and a member of CJBC who organized the protest, compared the University’s approach to climate justice to procrastination on an assignment, but she said that it seems BC has even gone beyond inaction.

“BC’s action in taking the Koch Foundation money goes beyond just playing into the inactivity surrounded by climate change issues,” she said. “It actively works against it to silence the truth and misinform the public.”