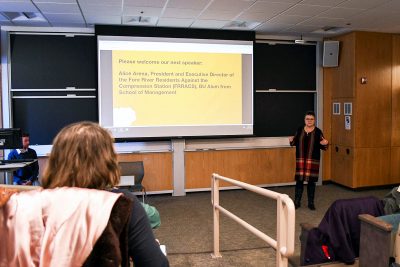 Divest BU held a town hall in the College of Arts and Sciences Saturday to discuss the importance of divestment from fossil fuels and examine the ways BU students can change the university’s policies on fossil fuel investments.

Attendees of “Combatting the Climate Crisis: A Town Hall” heard from local organization leaders, students and BU professors on divestment at BU and climate advocacy in the greater-Boston area.

[Gracie] Brett, who is also a member of Divest Ed, an organization that supports student-led divestment advocacy groups, said divestment is a critical step to building a future of ecological justice.

Two representatives from the Boston branch of the Democratic Socialists of America, Gracie Brett and Perri Meldon, spoke on the importance of removing profitability from the energy sector and refocusing the government and energy companies towards sustainable and healthy energy sources.

Brett, who is also a member of Divest Ed, an organization that supports student-led divestment advocacy groups, said divestment is a critical step to building a future of ecological justice.

“Divestment is a really cool tactic because it not only is doing something to alleviate the environmental harm of fossil fuels and take down fossil fuel corporations,” Brett said, “but it also is a great way to highlight how this system is fundamentally focused on profit and not ourhealth, not our livelihoods, nor our future, not the planet.”

Brett and Meldon also touched upon the financial benefits of divestment, stating that university trustees should be concerned about the current devaluation of fossil fuel stocks.

“Fossil fuel investments like coal are in rapid decline,” Brett said. “It makes really poor financial sense to be invested in these things.”

Alice Arena, president and executive director of Fore River Residents Against the Compression Station, spoke about her fight against the construction of a compression station, a facility that transports natural gas, in her town of Weymouth.

A BU alumna herself, Arena said she finds it frustrating to watch BU’s endowments being invested in fossil fuels. She used her experience in fighting the fossil fuel industry in Weymouth to highlight the impact divestment can have on local communities.

“Taking the money away from the beast, starving the beast as much as you possible can, this is the way to go,” Arena said. “It makes a huge difference for us in communities like Weymouth, Quincy and Braintree, who have been sickened for decades by all the toxic facilities that are down there.”

Richard Reibstein, a lecturer in environmental law and policy in the Earth and Environment Department at BU, said university administration should be worried about the reputational risk of continuing to invest in fossil fuels.

“If BU waits too long to do the right thing, it will fall into the class of old-fashioned, not very intelligent, inertial, and eventually elitist enemy,” Reibstein said. “We don’t need our institution that we love or are connected with to fall into that negative category.”

Maya Levine, a junior at Harvard University, spoke about the student-led climate protest at the Harvard-Yale University football game in November. She explained the process of organizing a peaceful and safe protest and noted that the primary purpose was to increase pressure on the university to divest from fossil fuels.

Levine said she is happy to be in an environment where she can support other organizations fighting for divestment by attending events like Divest BU’s town hall.

“It’s nice to be able to support other people in the area who are advocating for divestment,” Levine said. “Yes it’s Divest Harvard, yes it’s Divest BU, but ultimately it’s divest fossil fuels.”

Jacob Levitt, a sophomore in the Wheelock School of Education and Human Development and a member of the Student Activists Union, of which Divest BU is a member, said he came to the town hall to support student activism.

“I was just excited to come out,” Levitt said. “I didn’t know about a lot of this stuff, but it’s an issue that I certainly care about, and I’m excited to learn about it and represent Student Activists Union.”

Bolaji Olagbegi, a senior in CAS, said she appreciated hearing from members of the Boston community.

“It was really great to see a lot of people from the community come out,” Olagbegi said,  “just to help put things in perspective and make the situation more real and more tangible.”

Matthew Tate, a sophomore in CAS and member of Divest BU, moderated the town hall and said he viewed the event as a success. He said Divest BU hopes to raise awareness of and support for divestment in the BU community.

“What we’re looking forward to is expanding this town hall and these discussions into something that occurs a couple of times a semester,” Tate said. “I feel like it’s very valuable for students to realize that there are ways right now that you can participate in the process to help further our ideals as a university that is non-dependent on fossil fuels.”