Divest Ed is a training and strategy hub working to expand and empower the fossil fuel divestment movement one campus campaign at a time. 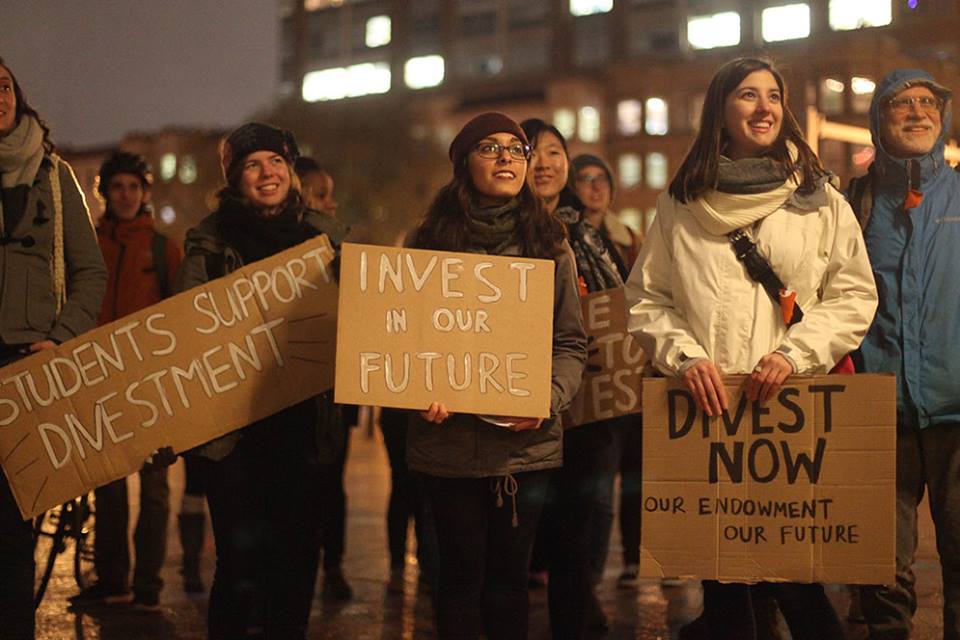 As institutions of considerable wealth and power, our colleges have the responsibility to act more like civic leaders and less like corporations. Divest Ed supports campaigns aiming to use the influence of their universities to empower people through divestment from greedy and destructive corporations and sustainable reinvestment in local communities.

We aim to build a sustainable, youth-led movement in which students can challenge their institutions, build critical awareness among their communities, share resources, and continue to organize for social justice long after they have left school.

Divest Ed officially launched in October 2018, but our parent organization Better Future Project has been supporting campus divestment campaigns in New England since the movement kicked off in August 2012. As this movement launched, 350.org hired field staff in every region except New England, where 350.org instead provided BFP directly with funding to hire our own Campus Divestment Organizer from 2012-2015. BFP is proud to have used that funding to help New England divestment campaigns make tremendous strides, and we continued to support student divestment organizers after 350.org changed their field model in 2015. In close partnership with 350.org and the Divestment Student Network, BFP has supported hundreds of student divestment organizers through campaign coaching, trainings, and network events. We have also connected students to the broader climate justice movement in Massachusetts, helping them find ways to take leadership in off-campus campaigns for state divestment, against new gas infrastructure, and more.

Since then, we have collaborated with divestment campaigns around the world to coordinate the first-ever Fossil Fuel Divestment Day, or F2D2. On February 13th, 2020, over 60 divestment campaigns took action to demand their universities divest from fossil fuels. We saw sit-ins, die-ins, tabling, rallies, teach-ins, and art builds. F2D2 was the largest mass mobilization in the history of the fossil fuel divestment movement.

By meeting one-on-one with student leaders, providing in-person trainings, connecting students to each other, and offering guidance, we have helped students develop the skills they need to take their campaigns to new heights.

Divest Ed disrupts the business-as-usual politics of the primarily class-privileged and white climate movement. Through political education, Divest Ed guides students to recognize the root of the climate crisis: capitalism and white supremacy. We strive to make the campus divestment movement is pro-Black, pro-Indigenous, class conscious and anti-capitalist.

Not only does Divest Ed aspire to “divest from the bad”, but also to “reinvest in the good,” as outlined in Movement Generation’s Just Transition framework. Fossil fuel divestment is a tactic to move resources from the capitalist, extractive economy and reinvest in community-controlled economies. This also means divesting our personal ideologies and beliefs from white supremacist and capitalist logic and reinvesting in QTBIPOC (Queer, Trans, Black, Indigenous, and People of Color) wisdom. Reinvestment is integral to our work.