Climate change is not an abstract future threat to humanity; the impacts are here and they’re going to get much worse. The severity and frequency of extreme weather events are a product of humans burning of fossil fuels and greenhouse gas emissions. If we want to do anything to adapt to and mitigate the impacts of climate change, we need sweeping legislation, bold restrictions on fossil fuel companies, and an active fight against their influence on our democracy. 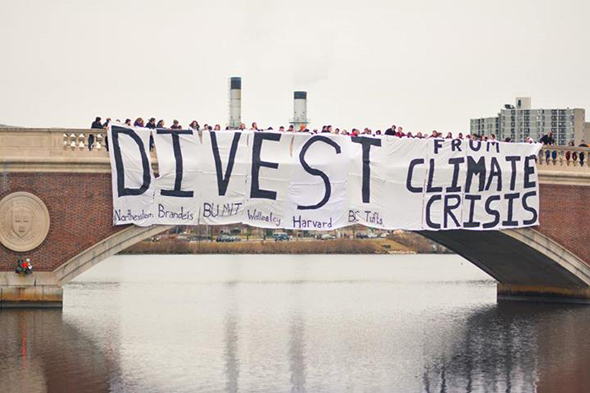 In order to avoid catastrophic climate change, at least 80% of all known fossil fuels have to stay in the ground. This fact means that corporations are doing everything in their power to extract and burn as much coal oil and gas as they can before our laws catch up to their reckless practices. So long as they have power, they will use it to stop our government from passing the common-sense climate legislation that we desperately need. Two-thirds of all greenhouse gases ever emitted were emitted by just ninety corporations. Meanwhile, the people who are being hit first and worst by climate impacts and environmental destruction are poor people, people of color, and people in developing nations. The generations of greedy CEOs and industry lobbyists responsible for unfettered pollution and the vast majority of greenhouse gas emissions will suffer the least from the impacts of climate change. Climate change is a symptom of the greed and unchecked corporate power of the fossil fuel industrial complex. If the fossil fuel industry’s business model succeeds, people die.

If we are to communicate to the fossil fuel industry, to CEOs, and to the politicians they own that we won’t stand for their destructive business model, we have to impact their bottom line. We have to speak with our money and our influence. It is not acceptable that 1% of the population owns the vast majority of wealth in this country. It is not acceptable that wealth allows some people to own politicians and virtually run our government. It is not acceptable that the richest and most powerful people in the United States work together in coalitions to maintain the status quo, to ensure that the rich get richer and the poor get poorer. That is why we must build a grassroots movement to divest from fossil fuels and challenge corporate power.

Read on to learn more about what fossil fuel divestment is and what the arguments are.

What is fossil fuel divestment?

Fossil fuel divestment refers to phasing out investments in fossil fuel corporations, namely, coal, oil and gas companies. Most of those who have divested specifically choose to divest from the 200 largest publicly traded fossil fuel companies with the largest carbon reserves (coal, oil, and gas), as listed in the Carbon Tracker 200.

Institutions are choosing to divest for both moral and financial reasons.

The moral argument is based on the belief that if it is wrong to wreck the planet, it is wrong to profit from the wreckage of the planet. And the people who will suffer first and suffer the most from climate change—the Global South, Black, Brown and Indigenous communities, and low-income communities—by and large have not contributed much to nor benefited as much from the pollution-based economy. Meanwhile, the largest extractors of fossil fuels in the world, such as ExxonMobil, Chevron, BP, and Shell, have not used their profits to invest in a just and gradual transition off fossil fuels toward renewable energy. Instead, they have used their wealth to fund and distribute junk science aimed at sowing doubt about the scientific consensus (which represents 97% of climate scientists) around climate change and to deliberately block, slow, and weaken policy advances through Congress, global treaties, and state legislatures. Divesting sends a message that such behavior is disreputable and not welcome in the mainstreams of society, and helps motivate climate action in government. Not only does the fossil fuel divestment movement seek to “divest from the bad”, but also to “reinvest in the good,” as outlined in Movement Generation’s Just Transition framework. Divestment is a successful tactic to move resources and power away from extractive industries. However, divestment itself does not guarantee justice to communities who continue to fight at the front lines of the climate crisis. Through reinvestment, students and colleges have the opportunity to support and learn directly from the growing number of thriving, local economies built by and for communities who have been marginalized and disenfranchised by current oppressive systems of power. Divest Ed is thrilled to support the development of place-based reinvestment tactics that are informed and led by local grassroots leadership.

The financial case for divestment argues that we are experiencing a “carbon bubble,” or an over-valuation of fossil fuel industry stocks in the world’s stock markets. Researchers have run the numbers, and current estimates suggest that society can only afford to burn approximately 20% of existing proven reserves of fossil fuels (that companies or petro-states already count on their balance sheets and intend to exploit) if we are to keep global temperatures at levels consistent with the conditions necessary to sustain human life and civilization. That means that up to 80% of those reserves must remain in the ground, and thus approximately 80% of the stock market value of fossil fuel companies will prove to be worthless once the market catches up with this realization.

What universities have already divested?

A real-time updated list of colleges and universities that have divested is available on Divest Ed’s website here.